Watching Wales lose to Italy on Sunday probably shouldn’t have been as nerve-racking as it was.

I wasn’t stressed because I thought we might be going out of Euro 2020; it was because we desperately wanted to get through on the night.

We really didn’t want to end up in third place in Group A because not only would it probably mean a harder draw in the last 16, we also wouldn’t have known whether we were definitely through for a few more days.

So, every time Conor McNamara came on Radio 5 Live with updates from the other game in the group, Switzerland’s win over Turkey, I had my head in my hands because I wasn’t sure what he was going to say. 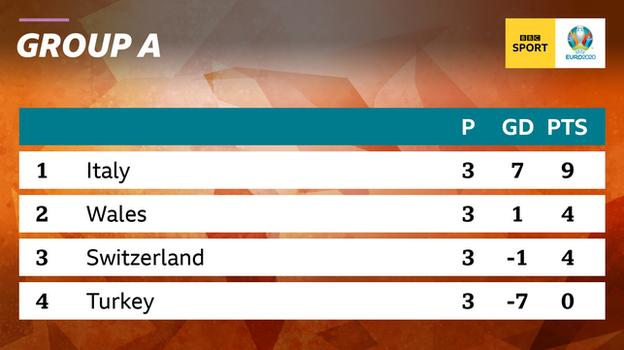 The Swiss scored so early and what started out as them needing a five-goal swing in goal difference to finish above us, was quickly down to three, then two.

You start thinking ‘it’s going to be one of those nights’ but, whatever the situation, it is so different for me watching Wales compared to what it was like playing for them.

On the pitch, you always feel like you can affect the game and do something. Now, I see things develop way before the players probably can.

During the Italy game, I was shouting at the screen to try to help them out but obviously that’s not going to change anything.

I was so involved I was yelling ‘come on Turkey!’ too but, in the end, the Wales players got the job done themselves in Rome. It was fantastic to see.

The defeat that started our celebrations

Our 10 men did so well to hold on because Italy were still coming forward in the final minute, trying to score a second goal.

I couldn’t believe it – I was shouting at them as well, saying ‘give it a rest!’

Our players would have had an idea about what was going on in the other game in Baku, but they stayed totally focused, defended well and took care of the things they could.

When the final whistle went and we had lost 1-0, it was a huge relief – I only experienced one defeat with Wales that brought a similar emotion.

That was when we lost 2-0 to Bosnia-Herzegovina in our penultimate qualifier for Euro 2016. It wasn’t make or break, but we knew we would be through whatever happened if Cyprus beat Israel in a game that had kicked off at exactly the same time as ours.

The final whistle went in our game and I looked straight across at our manager, Chris Coleman. He was looking straight back at us with his arms out, saying ‘I don’t know if we’re through’.

It was the reaction of Mark Evans, one of the FAW officials, that told us what we wanted to know.

He ran on to the pitch dancing, and we knew we had made it – although we didn’t know how – and that it was time to celebrate.

This gives Wales some much-needed cheer

It was a great feeling being in the camp when we beat Russia to clinch our spot in the knockout stage at Euro 2016.

This feels amazing too, looking in from the outside. I said before this tournament that it would be an achievement to get out of our group and I’m so proud of the boys for doing it.

Just making it to these European Championship finals was fantastic, of course, but reaching the knockout stages is a big step on from there.

So, the boys have done brilliantly. It has been a difficult few months for everyone in Wales but now this team have given them something to cheer about and look forward to.

When we were based in France last time, at first we didn’t realise in our camp quite how much a difference our results would make back home.

We found out all about that because of the lovely letters and messages we would get and you begin to understand the impact you are having on people’s lives.

It is the same this time. The squad can sit back with a smile on their faces and wait to find out who they play next from Group B.

It is probably going to be Finland, Russia or Denmark but I don’t really mind – they are all much of a muchness, really.

Depending on who we end up playing in Amsterdam, we might even be favourites but that just brings a different set of problems.

Whoever we play, we have got until Saturday to get ready for it, but it will probably be a case of recovering from a few sore heads first!

Five years ago, we had a few beers after the Russia game that sent us through, and the 2021 squad definitely deserve the same.

Rodon, Ward and Moore have been exceptional

The whole team have done brilliantly in the past week or so but there have been some stand-out individual performances too.

I picked out Joe Rodon as a player to watch before Euro 2020 started and he has been brilliant for us at the back in his first major finals.

Another star Welsh performer for me has been Danny Ward – it was such a big call for Rob Page to put him in goal.

Wardy made some big saves in all three of our group games and he has got to be one of the goalkeepers of the tournament so far.

And Kieffer Moore deserves a lot of credit too. We missed him in the early stages against Italy although I totally understand the decision behind him starting the game on the bench because he came into that game on a booking.

The whole team found it tough in Rome, of course, but I think that test will do us a lot of good.

We did not carry on our momentum from the Turkey win with a positive result this time but our performance on Sunday will give us lots of confidence for whatever comes next.