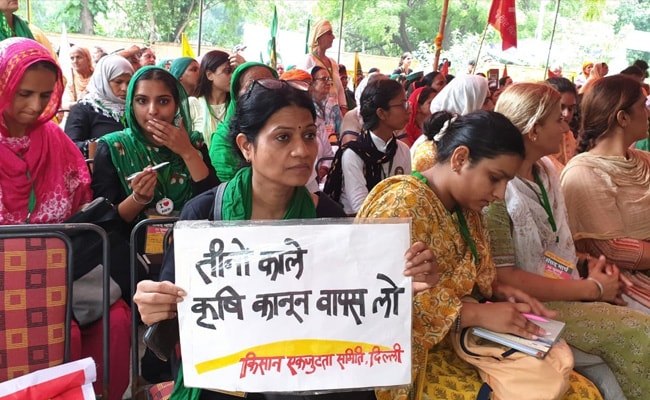 The women protesters on Monday, while moving towards Jantar Mantar to participate in a protest against the three farm laws, said that they will run all-women independent “Kisan Sansad“.

“For the first time, women will independently run the parliament (“Kisan Sansad“),” said one of the women protesters.

Reacting to the three new farm laws passed by the Parliament, one of the protesters said that the parliamentarians have passed black laws related to agriculture, education, and labour.

The women, youth, students, labour, and farmers have questioned the Parliament on the recent laws. “Our blood and sweat is not for you to waste, but it is for the development of the nation. We will not accept these laws and continue to raise questions at the Parliament,” they added.

Farmers in Haryana’s Jind District will organise a tractor rally along with tableaus in the city on the occasion of Independence Day in protest against the Centre’s farm laws, said farmer leader Bijendra Sindhu on Sunday, adding that they have decided not to allow any minister to hoist the tricolour on the occasion.

Farmers have been protesting on different borders on the National Capital since November 26 last year against the three newly enacted farm laws: Farmers” Produce Trade and Commerce (Promotion and Facilitation) Act, 2020; The Farmers (Empowerment and Protection) Agreement on Price Assurance and Farms Services Act 2020 and the Essential Commodities (Amendment) Act, 2020.