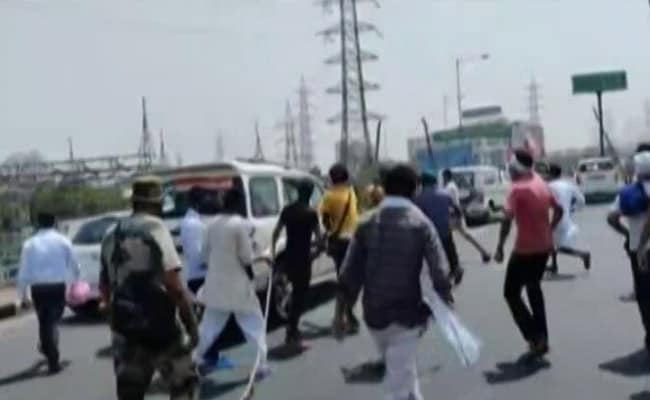 The BJP workers were at the protest spot to meet party leader Amit Pradhan.

A clash broke out between anti-farm law protesters camping out at the Uttar Pradesh-Delhi border at Ghazipur and the local BJP workers. Later, the BJP men held a protest near the office of the local police chief, demanding that immediate action be taken against the farmers, who have been blocking the highway since November last year. An investigation is in progress, the police said.

The BJP workers were at the spot to meet party leader Amit Pradhan who was on his way to Bulandshahr.

The farmers objected when they saw the BJP men, carrying party flags, gathering at the protest spot around noon. They showed black flags to the BJP men, setting off an altercation which turned violent. Stones were thrown and the BJP leader’s car was allegedly attacked.

The protesters, mostly supporters of the Bharatiya Kisan Union, have been camping at the spot since last year, demanding the scrapping of the Centre’s new farm laws. Part of the Delhi-Meerut Expressway has been shut since.

Farmer leaders have alleged that today’s incident is another “conspiracy by the government” to give the protesters a bad name. The farmers said they had asked administration officials to remove the BJP workers, who were creating a ruckus.

“They misbehaved with farmers and damaged their own vehicles as part of a conspiracy,” Samyukta Kisan Morcha spokesperson Jagtar Singh Bajwa was quoted as saying by news agency Press Trust of India. “This conspiracy of the government is not going to succeed because such tactics to end the farmers” protest have been used in the past too,” he added.

Mr Bajwa said the farmers will  lodge a complaint with the police over today’s incident, and if no action is taken, “we shall plan our future strategy accordingly”.