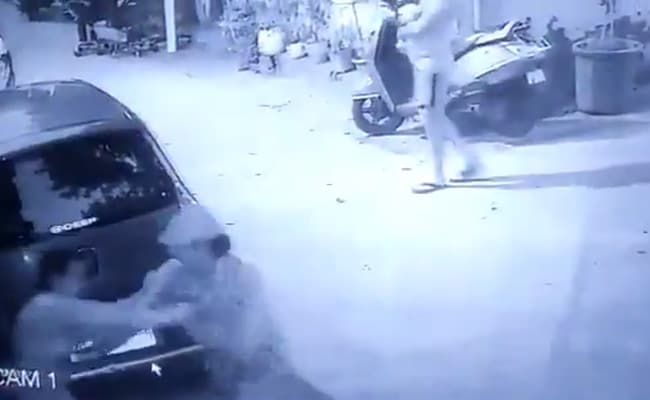 A 28-year-old woman was injured today after being stabbed multiple times outside her residence in Delhi’s Rohini area. The horrifying incident was captured by a CCTV camera installed nearby.

The woman is now admitted at Safdarjung Hospital and her condition is stated to be critical. Her family has alleged that she was attacked by their neighbour against whom she had filed a complaint in the past.

Police said the suspect, who has been identified as Naresh alias Raju, has been taken into custody. A case has been filed at the Shahbad Dairy police station, they added.

Police, however, have said that the motive behind the attack is yet to be confirmed. Asked about the family’s allegation, they said they are verifying it.

According to police, the incident took place around 8.30 pm on Thursday in the Sector-11 neighbourhood in north-west Delhi’s Rohini area.

The CCTV footage of the incident shows the attacker cornering the woman between two parked cars and stabbing her multiple times. As the attacker lunges at the woman, a man passing by is seen stopping for a moment and then walking away.

The incident comes days after a 19-year-old man was stabbed to death by four men in Delhi’s Ambedkar Nagar locality. That incident, too, was caught on a CCTV camera.

The man was on his way to a pastry shop to buy a birthday cake for his father on Tuesday when the attack took place. Police said the victim, Kunal, was attacked after a fight over a woman.