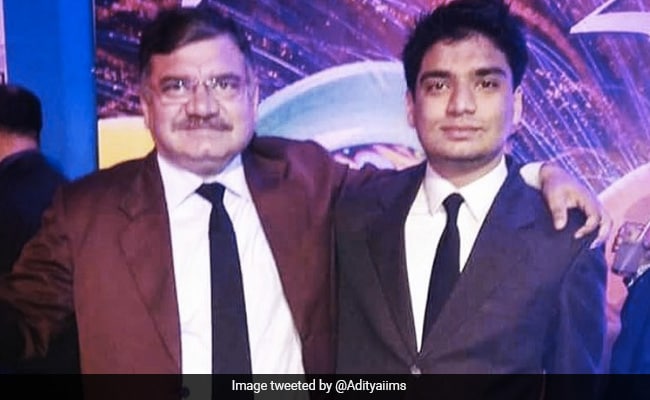 The doctor’s father died of Covid on April 30

Today on Father’s Day, many are celebrating the event with their fathers but 26-year-old Aditya Gupta, a resident doctor of pediatrics in Delhi’s AIIMS, only has memories left of his dad. “For many people their fathers are an authority figure but for me he was my closest friend. I am most hurt about the fact that I lost my closest friend with whom I could share anything under the sun,” he said.

Group Captain Sanjay Gupta was a fighter pilot who flew MiG-21 and served in the Air Force for 34 years. In December 2019, he was diagnosed with Leukemia, a type of Cancer. He was still battling it when he tested positive for COVID-19 this April and died 15 days later at the age of 55 on April 30.

He was the best dad. I miss you papa.I love you papa. Please come back. I want everyone to know, what a person you were. We all are very blessed to have experienced you for these past 55 years. pic.twitter.com/qDt7cVVPbS

On May 1, Dr Aditya posted a moving note about his father which went viral on Twitter with nearly 25 thousand likes and over 5 thousand retweets. In one of the tweets, he wrote: “I want him to be remembered. Not to be forgotten. For he is the face of this tragedy. He had fought Leukemia bravely but succumbed to COVID. I want people to know that death is not just a number. A country lost its warrior and a COVID warrior lost his father.”

I want him to be remembered. Not to be forgotten. For he is the face of this tragedy.
He had fought Leukemia bravely but succumbed to COVID.
I want people to know that death is not just a number. pic.twitter.com/QOeQC55EXx

Dr Aditya remembered how his father frequently visited him at his AIIMS hostel during his graduation days and how proud he used to be of his son.

And he just wasn’t an Air Force officer . He did LLB too and was a lawyer too.
He wanted to join Politics to serve this nation post retirement . pic.twitter.com/nRB7dU6YYz

“Recently I cleared my entrance exam for superspecialisation in Pediatric Oncology on 15th June and I wanted to call him and tell him that I have cleared this also. I wanted him to say, “Well Done beta!” but that could not happen” and I missed him. He is no longer there to give me advice also.”

His father wanted to serve the society even post retirement but now Aditya plans to fulfil those aspirations while saving others who are battling Cancer. He says, “My father used to say, “I am so happy that you are serving as a doctor and helping people.”

He added, “I am a very small fraction of who he was as a person and even if he is not here to fulfil those aspirations, I will do that. I have done my specialisation in Pediatric Oncology so at least I will be able to help children with Leukemia, if not adults.”

It was not just academics his father motivated him about but also life decisions. When Aditya wanted to have a love marriage and faced initial difficulties in convincing his in-laws, his father came to the rescue. He said: “Since it was a love marriage there were some initial hiccups in convincing the other side. But he made all the arrangements, and the ring ceremony took place at the Air force station. He used to say ‘Teri shaadi toh mai dekh ke jaana chaahta hu’.” Aditya got engaged on April 14. His father was hospitalised later that night and tested positive for Covid.

While Aditya will always continue to be inspired by his father, the void left behind will never be filled. He says, “Whether it’s my wedding or any other important moment of my life I will always miss him. I will miss my friend. I can always say that he is somewhere in heaven, still watching over me but his physical presence will always be missed. Just listening to his voice was so calming, it used to make me so happy.”