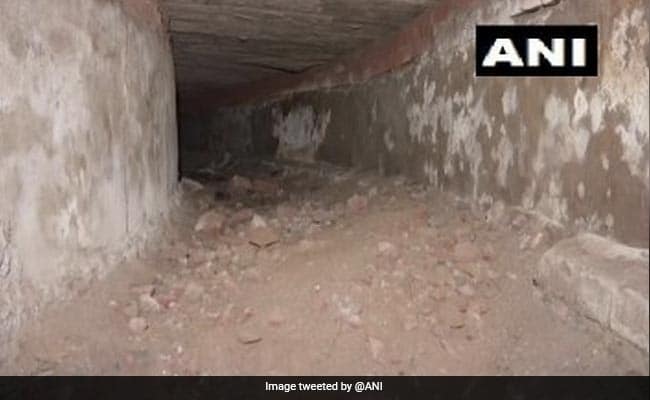 Speaker Ram Niwas Goel has said it is conjectured that the tunnel connects assembly building to Red Fort.

Historians and heritage experts, including those from the ASI, have called for carrying out a scientific investigation of a tunnel located beneath the sprawling building of the Delhi Assembly, which has again captured the imagination of the people.

The ”mystery tunnel”, first reported around 2016, has sparked multiple speculation, and experts said it will be too early to draw any conclusion unless the structure is thoroughly examined from an archaeological standpoint or any documentary evidence is found.

The subterranean structure’s mouth lies just below the floor of the assembly hall of the iconic building (Old Secretariat), which was constructed in 1912 by the British after the imperial capital was shifted from Calcutta to Delhi, and it is being planned to be thrown open to the public next year.

Delhi Assembly Speaker Ram Niwas Goel on Friday had said that historical significance of the tunnel is yet to be established but it is conjectured that the tunnel connects the assembly building to the Red Fort.

He also claimed that there was an “execution room” at the site where Indian revolutionaries were brought to by the British.

Many historians and heritage experts, including those who have done extensive research on the multi-layered history of Delhi, however, have expressed scepticism over the claims and suggested scientific investigation of the structure and the site.

A senior Archaeological Survey of India (ASI) official said that theories and conjectures abound in absence of investigation.

“So, the structures beneath need to be seen archaeologically, first. And, even if there are obstructions due to metro and flyover pillars, technology is there to investigate to test the theory. Without investigation, it would not be wise to make comments,” he told PTI.

Also, the Red Fort link theory seems a bit implausible as the distance between the 17th-century Mughal monument and the British-era landmark is over 6 km, and with a low height, a tunnel that long would be hard to imagine as it would also be hard to navigate, the official said.

There are also multiple passages to reach the Yamuna river from the Red Fort. Without investigation, it is difficult to tell if the purpose of the tunnel in question was to escape or to store and if it was built before the construction of the early 20th century structure that stands over it, experts said.

Another ASI official said no communication has been received by the Archaeological Survey of India from the Delhi Assembly authorities on carrying out archaeological examination of the tunnel.

Designed by architect E Montague Thomas, the current assembly building initially served as the Secretariat of the imperial government while New Delhi capital was being built.

Located in the prime Civil Lines area, the handsome white-colour landmark, also housed the Central Legislative Assembly when it was shifted to the new Parliament House near Raisina Hill in 1927.

Historian and author Swapna Liddle also feels the Red Fort link theory remains a speculation as it has no backing of archaeological or documentary evidence.

“Another possibility is that this was a ”tahkhana” (a cellar) for storage or hiding, given the British had grown wary of the native population after the 1857 Mutiny. So, a safe passage or hideout may have been built beneath the building,” she told PTI.

Ms Liddle, author of ”Connaught Place and the Making of New Delhi” and former convener of the INTACH Delhi Chapter, also said that a conjecture that the tunnel predates the assembly building also does not seem very plausible, “as why would the British take the tunnel out in the Ridge area”.

The Delhi ridge area was a site of major actions during the First War of Independence in 1857.

Rana Safvi, historian and author of ”Shahjahanabad: The Living City of Old Delhi”, feels that it was “highly improbable” that such a long tunnel linked the two buildings from two different eras.

“The British documented everything meticulously and if there was such an arrangement, some archival record or map must have shown it. Also, logically, there seems no reason as to why they would build such a long underground passageway,” she said.

City-based conservation architect and urban planner AGK Menon, however, said, if it was a secret tunnel, “of course, there will be no record of it”.

“The tunnel is visible, now it should be investigated thoroughly and architecturally examined before drawing any conclusion or propounding any theory,” he added.