Liverpool lead the race to sign Raphinha from Leeds but Manchester United and Manchester City are also interested in the Brazilian winger, 24. (Gianluigi Longari via Express)

Sead Kolasinac, 27, is still set to be sold by Arsenal after Schalke said they could not make the Bosnia left-back’s loan move permanent this summer. (Football London)

Atletico Madrid are open to offers for Spanish midfielder Saul Niguez, 26, who has previously been linked with Manchester United. (Marca – in Spanish)

Returning coach Massimiliano Allegri met with Juventus staff on Thursday, with the future of Portugal forward Cristiano Ronaldo, 36, top of the list of topics. (Goal)

Tottenham are still in talks with South Korea forward Heung-min Son, 28, over a new contract and are confident of an agreement once their new manager is appointed. (Fabrizio Romano, Twitter)

Douglas Luiz is expected to stay with Aston Villa as Manchester City are unlikely to trigger a buy-back clause for the Brazil midfielder, 23. (Express & Star)

Former Arsenal striker Nicklas Bendtner plans to continue his coaching education after announcing his retirement at 33, 17 months after the Dane played his last game for FC Copenhagen. (Ekstra Bladet – in Danish) 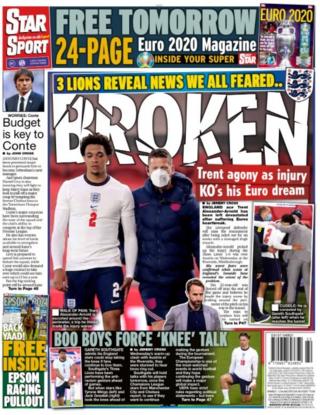