The other boys were apprehensive, perhaps a little embarrassed. They were here for football, they thought, not ballet. But Billy Gilmour had no such reservations.

It had been the same the previous term, when the talented young footballers within the Scottish FA’s Performance Schools programme took part in taekwondo lessons as part of the scheme’s multi-sports offering. Despite his group including a British champion in the martial art, Gilmour was determined to be top of the class.

So when an eight-week course of ballet sessions was mandated, his team-mates snickered and blushed, but Gilmour gave it his all. His coaches had explained it could make him a better player, training new muscle groups and increasing flexibility. He needed no convincing.

“He wanted to be the best at it,” says coach Andy Goldie. “He wasn’t concerned about what other people thought. The dance teacher thought he was absolutely fantastic.”

And it is with the same self-assuredness and work ethic that Gilmour has emerged for Chelsea and Scotland at just 20 years old.

Already a Champions League winner with his club, the young midfielder burst on to the international stage at Euro 2020, putting in a man-of-the-match performance in a 0-0 draw with England at Wembley.

Gilmour’s emergence as a key player for Scotland is the fulfilment of a journey that began almost a decade ago.

The SFA introduced the Performance Schools programme in 2012, scouting the best under-12s players from around the nation and enrolling them at whichever of the seven affiliated schools was nearest.

There, the boys are exposed to individual-focused training throughout the week and play matches with their clubs on weekends.

In February that year, Gilmour was playing for Rangers’ under-12s in a seven-a-side game against Celtic when he was earmarked for selection. Goldie was there to assess another boy, but Gilmour demanded attention. He was the smallest player on the pitch, playing a year above his natural age group, and he scored a hat-trick.

“He stood out like a sore thumb,” Goldie remembers. “Not just in his ability, but his desire win, to compete, his willingness to take the ball under pressure. He was like a young captain. He had a real presence about him despite his slight frame. My eyes were drawn to him.”

The following year, as soon as he was eligible, Gilmour enrolled at Grange Academy in Kilmarnock – the nearest of the Performance Schools to his home in Ardrossan – and instantly stood out for both his technique and tenacity.

One Friday, the players were tasked with curling the ball from the corner flag into the far side of the goal. On this occasion, Goldie – having joined in the drill – got the better of the young playmaker.

This served only to stoke Gilmour’s competitive fire. He picked up his ball, wandered further from the pitch and bent a perfect shot from beyond the corner, over a perimeter fence and into the goal.

Over the summer break of 2013, the players were set a homework assignment. When they returned for the new school year, they needed to be capable of 50 keepie-uppies with each foot and their head.

A family holiday in Turkey meant Gilmour was to miss the deadline for the challenge. So determined was he to complete the task, though, that he had his father, Billy Sr, film him performing the skills beside the hotel pool.

Standing 5ft 7in, Gilmour has always been undersized. He has overcome his lack of an imposing stature with a fearlessness on the pitch, always embracing the physicality of the game.

Even in the under-12s game against Celtic in which he was first scouted, two of the goals he scored were headers. And when, aged 15, he was first invited to train with Rangers’ first team, one of his first acts was a crunching tackle on captain Lee Wallace.

“He did it in the right way, but he properly rattled Lee,” remembers Mark Warburton, the former Rangers manager. “David [Weir, the assistant manager] and I looked at each other and thought, ‘Oof, this kid!'”

“There’s a real bit of devilment in him,” adds SFA coach James Grady, “which you need as a footballer.”

The Rangers board asked Warburton to visit Gilmour and his parents in an effort to convince the player to commit to a professional contract at Ibrox. The manager knew his efforts would be futile.

“It was obvious the Premier League clubs were interested in him, because he was such a prodigious talent,” he says. “Billy was destined for a very high level.”

When Gilmour returned to Grange Academy after having chosen Chelsea over the string of other clubs interested in him in 2017, one of his team-mates asked how the Premier League club differed from Rangers.

“At Rangers, I just needed to be the best in my group to come through,” he replied. “At Chelsea, I’ve got to be one the best in the world.”

He settled quickly, helping Chelsea’s youngsters win the Under-18 Premier League and the FA Youth Cup in his first season. And he proved as unfazed by the physical nature of the game in England as he had been back home.

In an early outing for Chelsea’s under-23s, Gilmour felt Andy King – a Premier League winner with nearly 400 senior appearances – didn’t look upon him as a worthy opponent. “I’m laying one on you early,” Gilmour thought to himself, before clattering into the veteran midfielder with a firm but fair challenge.

Just as he has been developmentally ahead of the curve at club level, there is precedence for his current mature-beyond-his-years performances on the international stage.

Gilmour has been a regular in Scotland youth teams since under-15s level, and in 2018 he was selected for the Toulon Tournament, a prestigious under-21 tournament in France.

He would not turn 17 until two days after Scotland lost on penalties to Turkey in the third-place play-off, yet he was named the ‘Revelation of the Tournament’. 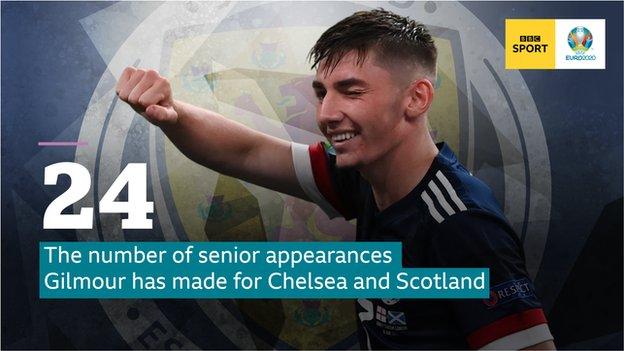 “It was an example of a young player being fast-tracked and the player rewarding the staff with real high-level performances and influencing games,” says Scotland under-21s manager Scot Gemmill. “He just took it in his stride.”

Grady adds: “Billy’s standards of training, of his work ethic, his desire to learn, to be the best and to out-work everybody every day – that’s why I wasn’t surprised he got into the [Euro 2020] squad.

“Steve Clarke, getting his eyes on him on a daily basis, cannot help thinking, ‘this boy’s for me’.”

The young players in the SFA’s Performance Schools are asked to choose elite players in their position around whom they will model their game. The boys study videos and design drills around what they have seen.

Setting his sights on becoming one of the world’s best centre-midfielders, Gilmour chose Andres Iniesta and Cesc Fabregas, two European champions with Spain whom he is now emulating with his impressive Euro displays.

“He always said he wanted to be one of the best players in the world,” says Goldie. “He’s on track to achieve that.”