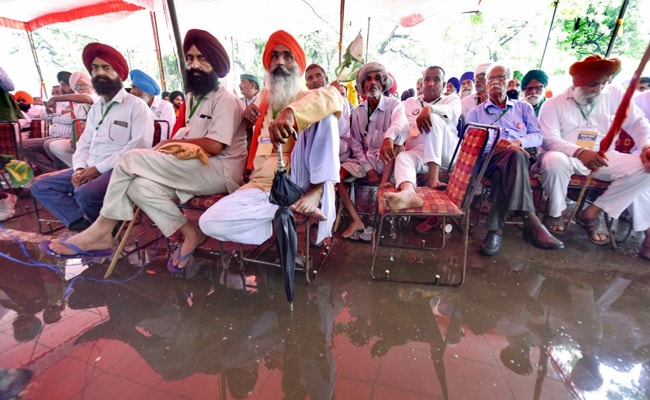 The protestors said the act was “unconstitutional and pro-corporates”.

The ”Kisan Sansad” being held by farmers at Jantar Mantar on Thursday held discussions on one of the three agri laws against which they have been protesting for over eight months and demanded its repeal, terming it “unconstitutional”.

On the sixth day of the ”Kisan Sansad”, the farmers passed a resolution to repeal the Farmer (Empowerment and Protection) Agreement on Price Assurance and Farm Services Act that was introduced last year, according to a statement by Samyukt Kisan Morcha (SKM), an umbrella body of over 40 farm unions spearheading the protest.

The protestors said the act was “unconstitutional and pro-corporates”.

“The ”sansad” unanimously rejected the ”Farmer (Empowerment and Protection) Agreement on Price Assurance and Farm Services Act 2020” as being unconstitutional, anti-farmer and pro-corporate, and declared that the act stands repealed.

“It was resolved that the act is meant for resource grabbing by corporates from farmers, and was in fact brought to promote corporate farming,” the SKM statement said.

During the ”sansad”, the farmers pointed out how various sections of the legislation showed that it exempted corporations from regulatory purview of various laws, while it did not provide any protective provisions to farmers who enter into contract farming.

The ”Kisan Sansad” that is being held parallel to the Parliament’s Monsoon Session is part of the latest strategy of the farmers who have been protesting the Centre’s three contentious farm laws at multiple Delhi borders since November last year.

The farmers have been protesting the Farmers’ Produce Trade and Commerce (Promotion and Facilitation) Act, the Farmers (Empowerment and Protection) Agreement of Price Assurance and Farm Services Act and the Essential Commodities (Amendment) Bill, 2020.

The farmers have expressed fear over the laws which they say will eliminate the Minimum Support Price system, and leave them at the mercy of the big corporations.

Over 10 rounds of talks with the government, that has been projecting the laws as major agricultural reforms, have failed to break the deadlock between the two parties.

As part of these ”Kisan Sansad” sessions, 200 farmers from the protest sites participate in a mock Parliament session at Jantar Mantar during which issues concerning the farming community are discussed.

The ”Kisan Sansad” also resolved and appealed to the President of India to ensure that “the supremacy of Parliament remains intact”.

“The Narendra Modi-led BJP government has failed miserably to conduct the Parliament proceedings according to rules and constitutional provisions during this government”s tenure.

“People’s anguish, pain and pressing issues, including of life and death matters, were not allowed to be discussed in both Houses of Parliament,” the SKM statement said.