Borussia Dortmund have handed Manchester United a take-it-or-leave-it asking price of £77m plus add-ons for them to sign England winger Jadon Sancho, 21. (Talksport)

Paris St-Germain have made contact with Real Madrid over a potential deal for French defender Raphael Varane, 28. (Foot Mercato – in French)

Arsenal have opened talks with Eintracht Frankfurt over a move for Portugal striker Andre Silva, 25, who will be available for about £34m this summer. (Express)

Lazio are ready to sell 26-year-old Argentina forward Joaquin Correa, who has attracted interest from Arsenal and Tottenham, and the Gunners could use Uruguay midfielder Lucas Torreira, 25, as part of the deal. (Gazzetta dello Sport)

Turkey’s 27-year-old midfielder Hakan Calhanoglu, who is out of contract at AC Milan this summer, has been given a deadline to decide his future, amid reports of interest from Arsenal. (Express)

Eintracht Frankfurt are interested in Roma’s Turkey winger Cengiz Under, 23, who spent last season on loan with Leicester City and could be available for 10m euros (£8.6m). (Calciomercato – in Italian)

Fiorentina are resigned to losing Nikola Milenkovic this summer as he has a year left on his contract and is not going to sign an extension. They will demand about £15m for the Serbia defender, 23, who is rumoured to be wanted by Juventus and some Premier League clubs. (Calciomercato – in Italian)

Barcelona have made contact over a potential move for Atalanta’s Germany wing-back Robin Gosens, 26. (Sport1 – in German)

West Brom are also close to appointing Barnsley boss Valerien Ismael as their new manager after reaching an agreement in principle with the 45-year-old Frenchman. (Football Insider) 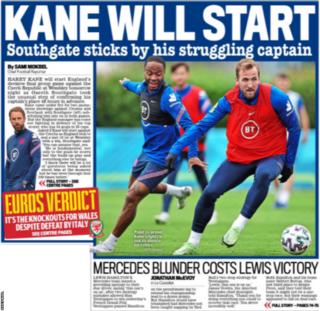