Tapu Barman could not sleep for two days

Bangladesh national team footballer Tapu Barman could not sleep for two days. This is the destiny of the national football team. When he returned to Dhaka after the tournament, he saw Jamal Bhuiyan and Tapu Varman’s black faces at the airport. The picture has become quite familiar.

Just like the last time after the SAF Championship last October, today the national football team returned with its head bowed again. Today’s picture differs from the previous ones, this time with the added frustration of not being able to win against the teams at the bottom of the rankings.

To play Mahinda Rajapaksa in the final of the tournament on Tuesday, Bangladesh would have had to draw with Sri Lanka in the last match of the group stage. But a relatively weak team like Sri Lanka was reduced to 10 in 32 minutes, but Bangladesh could not even draw against them, losing 2-1. 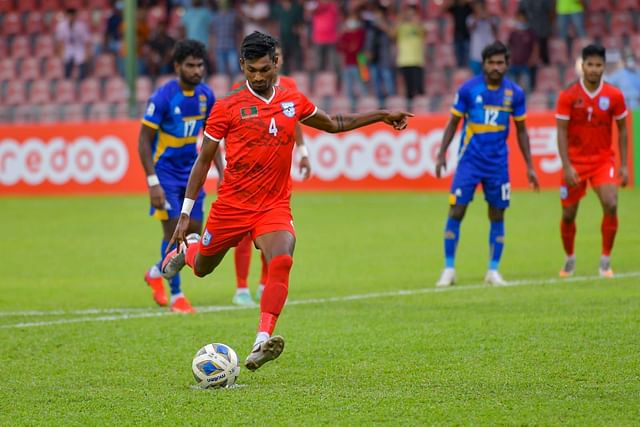 The four-nation tournament showed that there is no team under Bangladesh in world football now! Bangladesh drew 1-1 with Seychelles at 199 before losing to Sri Lanka in the 204th rankings. The situation against Sri Lanka is such that many people say that the victory of Bangladesh against Maldives is unfortunate.

The big regret of the losing match against Sri Lanka is the penalty miss. Bangladesh defender Tapu Barman failed to score from the spot kick. After Jewel Runner’s goal equalized, Bangladesh scored from the penalty spot at the last minute to make it 2-1 and leave the tournament.

Usually, there is no pair to score a goal from a spot kick. All three of his goals for the national team came from penalties. He was chased away by a penalty miss against Sri Lanka last Tuesday. The situation is such that the penalty miss is not letting him sleep. “I couldn’t sleep for two days,” Tapu told Prothom Alo when he returned to the country today. I came home with difficulty. It’s very frustrating for me. Disappointment for Bangladesh. It’s hard to forget this grief. ”

Although Tapu was optimistic about reaching the final after the penalty miss, “I was confident we would score after the miss. I got the goal. But again I scored a goal at the last moment. I ate the goal at a time when there was no chance of repaying. ‘

Mario Lemos of Portugal is the interim coach of Sri Lanka’s four-nation tournament. He will return to the charge of Abahani Club. In a video message sent back to the country by BFF, Lemos lamented, “It’s a disappointment. We were very close to the final game. Our main goal was to play in the final. The way we lost is very frustrating. I think we could have done better. ”

back to the country by BFF

Earlier, Lemos blamed the lack of attention behind the match rate. But why the repeated lack of attention? According to football analysts, players on the field tend to be inattentive due to lack of dedication and ability. If you don’t learn these things at a young age, you can’t teach these things to the players in the national team.

The reluctance of the club and BFF to make players could push the national team to greater danger in the future. Without looking at the lower leagues, BFF is lying with a sapphire Premier League.

BFF has no initiative of its own, many people have contacted themselves but there are allegations that BFF has not received any response. Nigerian footballer Elita Kingsley, who got Bangladeshi citizenship last March, has not yet been able to get international clearance from BFF.