Which six will progress in Championship?

After four weeks of T20 Blast action, the County Championship returns on Sunday.

Two rounds of matches – the second follows a week later – will reduce the number of teams that can become this season’s champions from 18 to six.

Under the new format for 2021, the top two sides in each of three groups will progress to Division One, carrying forward the points from the matches played against each other.

A further four rounds of games will then follow against those they have not already met, with the top side in the Division One table claiming the County Championship title last won by Essex in 2019.

The top two will then head for Lord’s in late September for a one-off game for the Bob Willis Trophy, also won by Essex last summer.

The remaining 12 teams that do not go into Division One will move into Divisions Two and Three, in which teams will also play another four matches. 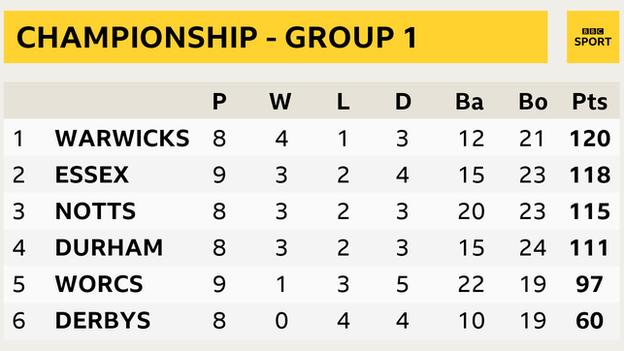 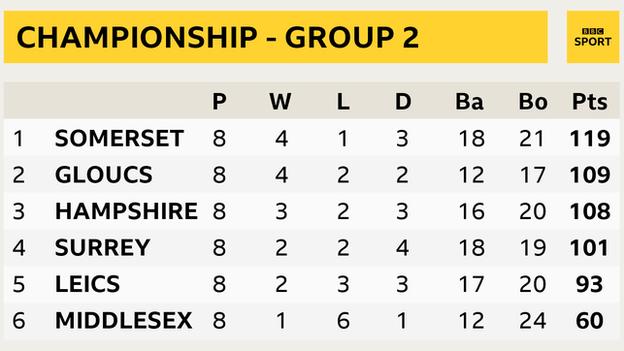 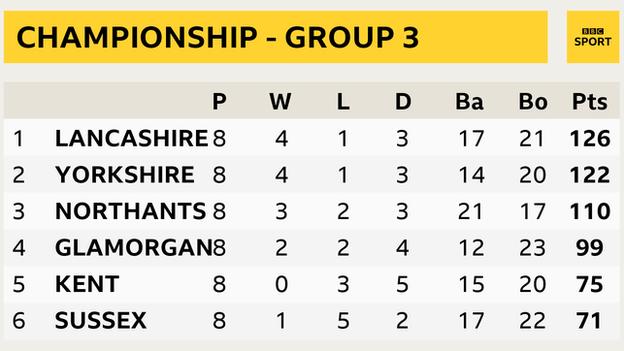 Who is in contention?

Essex and Worcestershire are not in action this week, having already played a game more than everyone else.

At this stage, Derbyshire, Middlesex and Sussex are the only sides that definitely cannot reach Division One.

But Worcestershire, who only have one match of their initial 10 to play, could join them if at least two of the teams above them in Group One reach 122 points or more following the penultimate round of games.

It’s a similarly precarious situation for Kent in Group Three.

They are the only team yet to win a Championship match in 2021 and can only reach 123 points with two maximum-points victories.

But Lancashire already have 126 and another two points for Yorkshire would take them to 124 and end Kent’s hopes of a first title since 1978.

Somerset, six-times runners-up in the 21st century, have a 10-point lead in Group Two, but they are leaving nothing to chance and have New Zealand opener Devon Conway in their side for the next two games.

It is a timely acquisition, with captain Tom Abell sidelined after suffering a hamstring tear in a T20 Blast game.

Surrey are fourth in the same group, 18 points behind, and they have also turned to the ranks of the new world Test champions to add some extra firepower after Australian Sean Abbott had to fly home because of injury.

Paceman Kyle Jamieson had match figures of 7-61 against India at the Ageas Bowl and Surrey hope he can produce something similar against Hampshire on the same ground, and then against Somerset at The Oval.

Stars of the season so far

Durham’s David Bedingham and Jake Libby of Worcestershire have shone with the bat, each hitting three centuries and scoring more than 700 runs.

South African Bedingham’s career-best 257 against Derbyshire in April is the highest innings so far, beating the 245 made by England’s Ollie Pope for Surrey against Leicestershire.

Among the bowlers, it is the ‘old reliables’ who have been giving batsmen plenty to worry about this summer.

Chris Rushworth became Durham’s leading wicket-taker in first-class cricket as they beat Worcestershire last month and has taken 40 at a cost of just 16.67 each in their eight games.

Just two behind are Nottinghamshire seamer Luke Fletcher and Essex spinner Simon Harmer, while Craig Overton’s 36 victims for Somerset helped earn him a recall to the England Test squad.

Ollie Robinson has 29 wickets for Sussex and was hoping to return to red-ball cricket against Glamorgan at Hove on Sunday following his suspension from international duty – but a Covid case at his county may have put that in doubt as Robinson had to go into isolation after being identified as a close contact.