“Test cricket is a different challenge because it’s something we don’t do very often,” Jones, 27, told the BBC World Service’s Stumped podcast.

“The way we’ve seen the standard progress across lots of nations, we can definitely see it being played more.”

There have been only 30 Tests since 2000, 14 of which have been Ashes Tests between England and Australia.

In the same period there have been 942 men’s Tests. 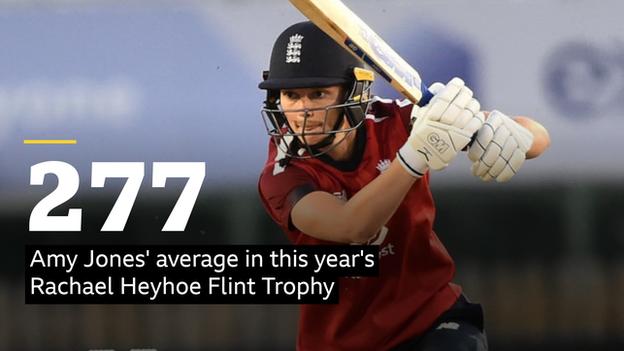 Jones has played one Test, 47 one-day-internationals and 57 Twenty20s for England since making her debut in 2013.

She has been in superb form this season, with centuries in her only two innings for Central Sparks in the Rachael Heyhoe Flint Trophy, the domestic 50-over competition.

She made 114 against Northern Diamonds on Saturday and an unbeaten 163 off 114 balls – including 17 fours and six sixes – against Western Storm on Monday.

“A couple of dropped catches helped and it was a short boundary, but it was a good wicket and I was feeling good on the back of Saturday,” Jones said.

“My mum, dad and some other family came down. I have played at Edgbaston maybe five times and I’ve not done well at all.

“My dad said to my uncle at the start, ‘don’t expect much – she’s not very good at Edgbaston’, so there were some low expectations from them.”

England and India will play three ODIs and three T20s after the Test.

Jones is expecting a tough challenge against “a world class” India side that were runners-up to England in the 2017 World Cup and second to Australia in last year’s T20 World Cup.

“The last tour we played in India, Shikha Pandey and Jhulan Goswami caused a lot of trouble – they are two very experienced bowlers,” Jones said.

“Batters-wise, there are loads, but Mithali Raj is world class. Hopefully we get some really competitive games.”